India has continued its domination in the medal count by a wide margin, as the regional sporting event nears its conclusion. Indian athletes have displayed their best shows by clinching 49 medals comprising 23 golds, 20 silvers and 6 bronze on the 6th day of the games. 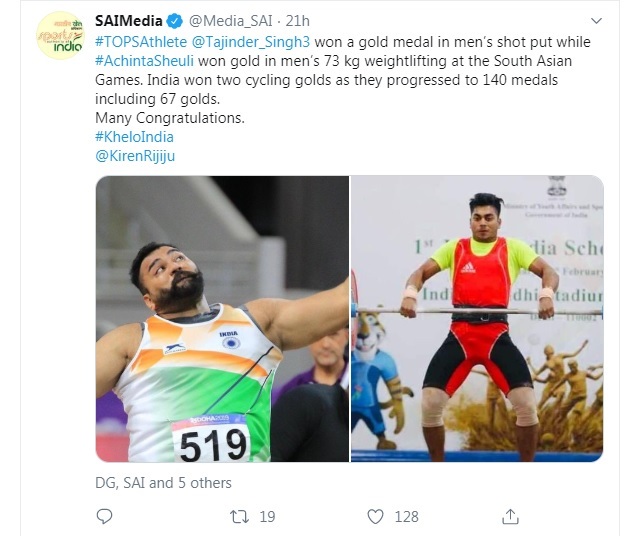 Indian shuttlers also displayed a terrific performance at the games by bagging 8 medals in individual events including four gold medals, two silver and two bronze medals. India won gold in men’s and women’s singles badminton event and in the men’s doubles and mixed doubles event. India also won two gold medals in the men’s and women’s team events to finish at the top in the badminton medal standings.

In Table Tennis, India made a clean sweep with seven gold and five silver medals, winning the maximum medals on offer in the game. India claimed gold in both men’s and women’s singles event.

The South Asian Games 2019 began on December 1, 2019 at Kathmandu in Nepal. The 13th edition of the games will conclude on December 10.

Different cities of Nepal are hosting the event including Kathmandu, Pokhara and Janakpur.

The South Asian Games 2019 official mascot is a pair of blackbucks. Blackbucks is an endangered specie, which are mostly found in the southern region of Nepal.

Overall, a total of 2,715 athletes are competing in the event, which includes a total of 26 sports. Cricket returned to the games after a gap of eight years.