Beni Prasad Verma was a founding member of the Samajwadi Party and was considered close to the party head Malayalam Singh Yadav.

Former Union Minister and founding member of the Samajwadi party, Beni Prasad Verma passed away on March 27, 2020. He was 79.

The Samajwadi Party tweeted condoling the death of the senior party leader saying that the demise of the leader is an irreparable loss.

Beni Prasad was not keeping well since the past few days, informed his son Rakesh Verma. He passed away at around 7 pm. He had been admitted to a private hospital in Lucknow. 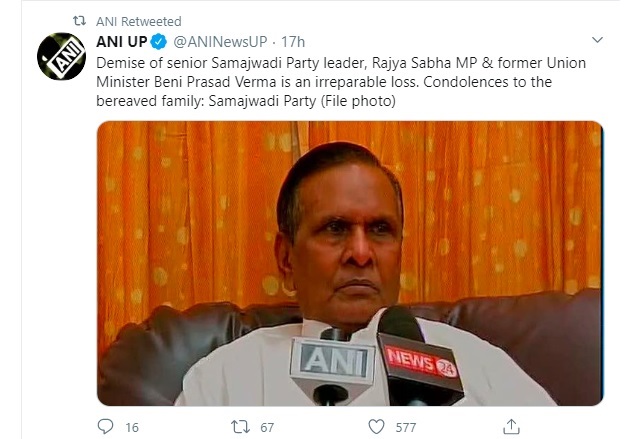 • Beni Prasad was born on February 11, 1941 in Sirauli, in Uttar Pradesh’s Barabanki district.

• He was a founding member of the Samajwadi Party and was considered close to the party head Mulayam Singh Yadav.

• He initially served as the Minister of Public Works Department under the Uttar Pradesh government.

• He served as the Independent Minister of State for Communications between 1996- 1998 under HD Deve Gowda’s government.

• He was given the additional charge of the Minister of State for Parliamentary Affairs.

• He was given the charge of Union Steel Ministry under the Manmohan Singh-led UPA-2 government in 2011.

Beni Prasad’s Political Journey: SP to Congress and back

After decades-long association with SP leader Mulayam Singh Yadav, Prasad created his own political party for the 2007 UP elections but it failed to register any win.

He formally joined the Indian National Congress in 2009 and contested the Lok Sabha election from Gonda parliamentary constituency. He lost the seat to BJP’s Kirti Vardhan Singh in the 2014 General Elections.

He quit the Congress and rejoined the Samajwadi Party in 2016, after which he was elected as a member of the Rajya Sabha.