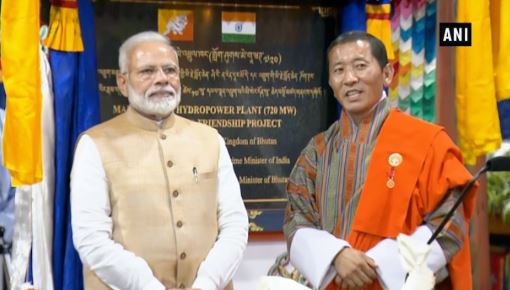 Mangdechhu hydroelectric power plant in Bhutan was recently inaugurated by Prime Minister of India Narendra Modi. It is one of the major projects under Bhutan’s initiative to generate 10,000 MW hydropower by 2020 with the support of the Government of India (GOI).

Mangdechhu hydroelectric power plant project was touted as a Bhutan-India friendship project. Cost of this project is around Rs 4,500-crore and this 720MW run-of-river power plant built on the Mangdechhu River in Trongsa Dzongkhag district of central Bhutan. Mangdechhu Hydroelectric Project Authority (MHPA) developed this project with the help of Indian and the Bhutanese governments.

• The project is funded by India through a 70 percent loan and a 30 percent grant. It is estimated to generate 2,923 GWh of electricity.
• Hydropower project’s construction was started in June 2012 and the first of the four units of the power plant was commissioned in June 2019.
• According to the reports, the project is estimated to generate 2,923GWh of electricity and offset 2.2Mt of CO2 a year from the atmosphere.
• Bhutan’s newly launched Mangdechhu hydropower project will fulfil the energy requirements of Bhutan and the surplus electricity will be exported to India.