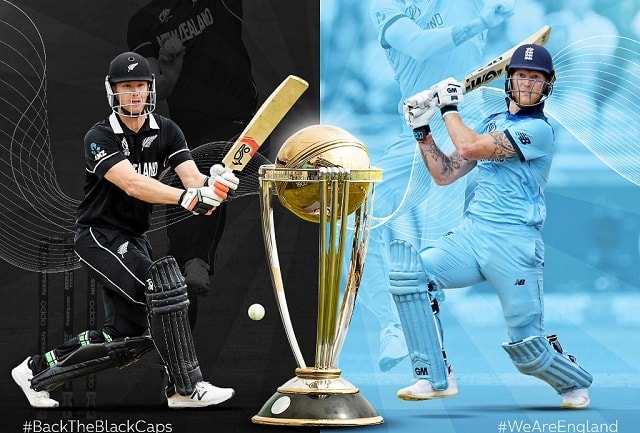 New Zealand vs England final, World Cup 2019: New Zealand and England will come face-to-face for the title clash for the first time in the ICC Cricket World Cup. The New Zealand vs England World Cup final 2019 will begin at 3.15pm IST at the Lord’s cricket ground in London. Whoever wins, history will be created today, as it would be the first world cup win for the nation. England despite being the inventor of the game has never won the World Cup and New Zealand, despite being one of the strongest teams has also never won the World Cup. This would be New Zealand’s second consecutive final, after it made through the finals of the 2015 World Cup only to lose against Australia. England will be entering its first world cup final in 27 years, after 1992 World Cup where they lost to Pakistan.

New Zealand vs England World Cup Title Favourites
Both England and New Zealand were title favourites from the start of the tournament. Though England was struggling a bit initially, it picked up its act in the latter half of the tournament and entered the finals with a thumping victory over Australia. New Zealand, on the other hand looked formidable in the beginning but they struggled towards the end but came back strongly in the first World Cup semi-final against India, winning by 18 runs in a nail-biting finish.

4. 1983 World Cup: New Zealand won by 2 wickets
In a nail-biting finish, New Zealand chased down the target of 235 to defeat England for the first time in their world cup face-off.

5. 1992 World Cup: New Zealand win by 7 wickets
New Zealand continued its winning streak against England by chasing down the target of 201 with 55 balls remaining. This was the first world cup where the teams were wearing coloured jerseys and were playing 50 overs instead of earlier 60.

7. 2007 World Cup: New Zealand won by 6 wickets
England managed to put up a total of just 209 runs,which was easily chased down by New Zealand with 54 balls remaining.

9. 2019 World Cup: England win by massive 119 runs
England recorded its win over New Zealand in a world cup in the 2019 group stage after more than two decades. The England vs New Zealand group stage was largely one-sided as England crushed New Zealand by 119 runs to become the third semi-finalists.

Though New Zealand was formerly one of the unbeaten sides in the World Cup 2019, it has been struggling with poor top order form. Even in the semi-final against India, New Zealand’s top order crumbled one after another. England, on the other hand, has a formidable batting line-up. Both the teams have quality bowling attack so it will all come down to the batsmen today. New Zealand batsmen will have to be at their best today to give England a tough fight, otherwise the match would become one-sided, because England has a deep batting line-up and a formidable bowling attack.