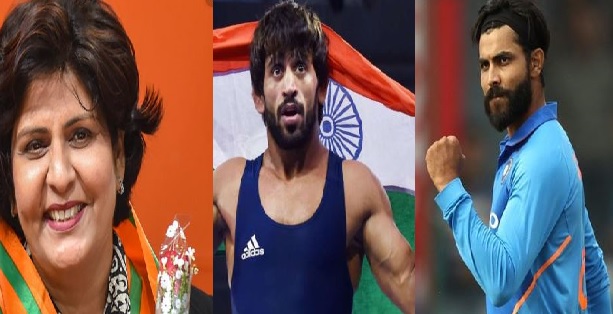 Selection Committee for Sports Awards 2019 nominated Deepa Malik for Rajiv Gandhi Khel Ratna 2019 and 19 other payers including Ravindra Jadeja for the prestigious Arjuna Award. Deepa Malik will be the first female para-athlete to win the prestigious sports award of India. She will be joint recipient with wrestler Bajrang Punia for highest sporting honour.

• This award is named after former Prime Minister of India Rajiv Gandhi. It was instituted in 1991-92.
• The first recipient of the award was Chess Grandmaster Viswanathan Anand, who was honoured for the performance in the year 1991–92.
• The latest winners of Rajiv Gandhi Khel Ratna award are Virat Kohli and Mirabai Chanu.
• In this award, a medal, a citation and 7.5 lakh rupees are given to the winner.

• National Arjuna Award was instituted in 1961, it is India’s second-highest sporting award after Rajiv Gandhi Khel Ratna Award.
• Arjuna Award bestowed upon sportsperson for consistently outstanding performance for four years.
• Sportsperson in recognition of their consistently outstanding performance for four years in National sports can be nominated for this award.
• Union Ministry of Youth Affairs and Sports conferred this award. It carries bronze statuette of Arjuna, a scroll and a monetary award of 5 lakh rupees.