NASA to launch Dragonfly to search for life on Saturn’s largest Moon, Titan. 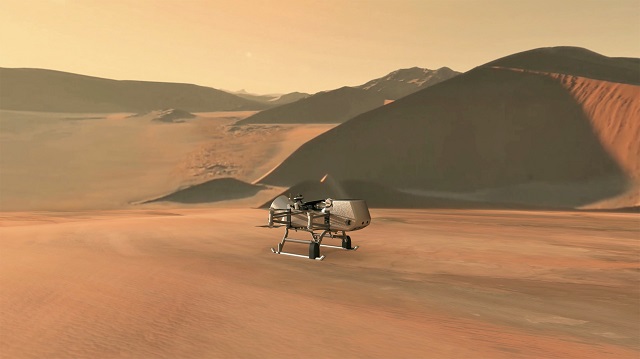 NASA has planned to return to Saturn’s moon Titan with a nuclear-powered drone, Dragonfly. NASA plans to launch the drone lander mission as early as 2034 to search for life on Saturn’s largest moon.

Dragonfly, is expected to travel billions of kilometer to search for signs of microbial alien life on Saturn’s moon Titan, while navigating its earth-like gravity and aerodynamics in the process. The mission will succeed NASA’s Cassini probe, which ended its 13-year mission orbiting Saturn in September 2017 by diving into Saturn’s atmosphere.

Dragonfly mission is a part of NASA’s New Frontiers program, which includes a series of space exploration missions, which are being conducted with the purpose of researching several of the Solar System bodies, including the dwarf planet Pluto. The New Frontiers programme also includes Pluto probe New Horizons, Jupiter probe Juno and OSIRIS-Rex asteroid mission.

The Dragonfly drone will travel to multiple locations on Titan to search for signs of microbial alien life, navigating Titan’s Earth-like gravity and aerodynamics in the process. The Dragonfly mission replaces a previously discontinued concept project called Titan Saturn System Mission (TSSM), which required a balloon probe to circumnavigate Titan.

The Dragonfly mission is more flexible, as it will be able to fly to specific locations to take readings on the surface of Titan. It will have eight rotors powered by a Radioisotope thermoelectric generator (RTG) similar to Curiosity, the Mars rover.

While, the Mars 2020 rover’s helicopter technology demonstrator is likely to be the first flying robot on another planet, Dragonfly will be the first one to do science while flying and it will also be the most distant robotic explorer on the surface of a planet or moon.

The Cassini mission comprised NASA’s Cassini probe and ESA’s Huygens lander, both were named after astronomers Giovanni Cassini and Christiaan Huygens. Cassini was the fourth space probe to visit Saturn and the first to enter its orbit. It had been the first to land on Titan and the probe had revealed Titan to be one of the most Earth-like worlds.

The Cassini-Huygens was a mission of firsts, as it was the first to orbit Saturn, first to land in the outer solar system and first to sample an extraterrestrial ocean.

The mission was launched aboard a Titan IVB/Centaur in October 1997. Overall, Cassini was active in space for nearly 20 years, with 13 years spent orbiting Saturn and studying the planet and its system after entering Saturn’s orbit on July 1, 2004.

Titan is one of the very few objects in the solar system with a thick atmosphere, up to four times more dense than Earth’s atmosphere. The moon is reportedly to be one of the most Earth-like worlds.

Titan is the only object in the solar system other than Earth with permanent bodies of liquid on the surface.