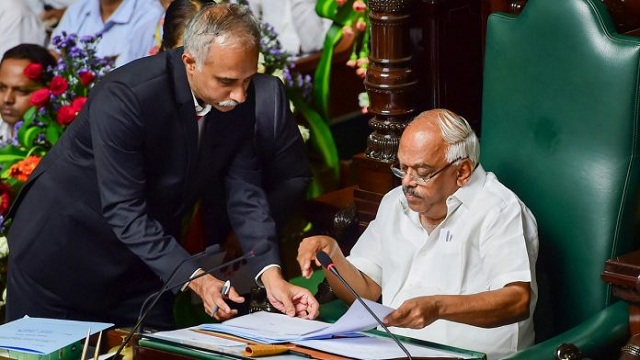 Karnataka Political Crisis: Karnataka Speaker KR Ramesh Kumar disqualified 3 of the 17 rebel MLAs of the Congress-JD(S) coalition government, Ramesh Jarkiholi and Mahesh Kumathahalli from Congress and independent legislator R Shankar on Thursday. The speaker banned the three MLAs from contesting elections till 2023, dampening their hopes of being ministers in the event of the BJP forming the next government in the state.

Karnataka assembly speaker disqualified two Congress MLAs – Ramesh Jarkiholi and Mahesh Kumathahalli and Independent legislator R Shankar from Ranebennur, under the anti-defection law after they played a pivotal role in bringing down HD Kumaraswamy’s coalition government in Karnataka. The two Congress MLAs were among the 15 MLAs who resigned from their positions three weeks ago. The Independent MLA, who had earlier supported the Congress-JD(S) coalition government, later resigned and pledged support to the BJP. However, the speaker said since he had merged his party with the Congress, he was effectively with the Congress.

Speaker KR Ramesh Kumar said that all the three MLAs cannot contest elections till the 15th state assembly is dissolved. “I have rejected the resignations… the way they have come — it compelled me to arrive at the inference that resignations were not voluntary and genuine,” Kumar said.

Speaker Ramesh Kumar further said, “I don’t have the power to penalise the 3 MLAs. Everybody is watching my behavior. If the finance bill is not passed by July 31, it is my responsibility that such a financial impasse is not created. By Monday, it will be 29th. I have to discharge my obligation.”The speaker further said that the decision regarding the other rebel lawmakers will be announced soon. There are disqualification petitions against 14 more MLAs pending before Kumar.

All the three disqualified MLAs were believed to be ministerial aspirants in the event of BJP forming the next government in the state. However, the speaker has now barred them from MLA position till 2023. The cases of the remaining 14 MLAs are still pending.

The Congress-JD(S) coalition government collapsed on Tuesday after it lost the trust vote in the Karnataka floor test. HD Kumaraswamy submitted his resignation to Karnataka Governor Vajubhai Vala, who asked him to continue as caretaker CM till the next government is formed. The BJP led by BS Yeddyurappa staked claim to form government in Karnataka today. BS Yeddyurappa is expected to take oath as CM at 6 pm. Yeddyurappa is likely to face the floor test on Monday.

With the recent three disqualifications, the total strength of the Karnataka state assembly has come down from 225 to 222, bringing the majority mark down to 112.

The BJP currently has 105 members and the party does not look to form a minority government in the state. The party spokesman G Madhusudan stated that if the speaker takes longer to accept or reject the rebel MLAs resignation then, the Karnataka Governor Vajubhai Vala may recommend President’s rule in the state, which would mean early elections in the state.