INS Khanderi, Scorpene-class submarine, commissioned into the Indian Navy, after undergoing several sea trials for over two and a half years. Know key features of the INS Khanderi here. 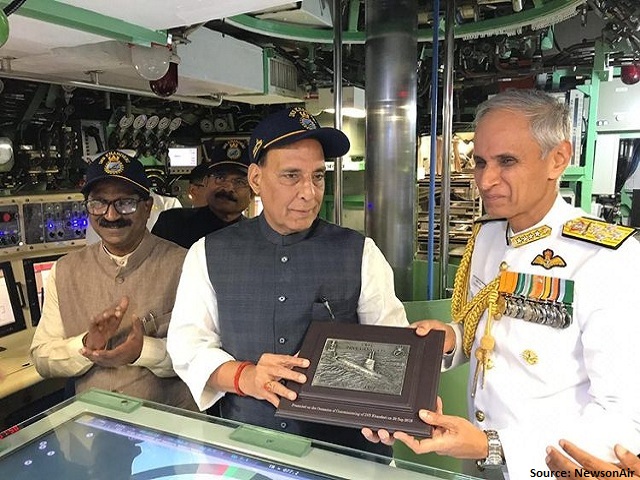 INS Khanderi is fully automated and has been built at the Mazagon Dock Shipbuilders Limited in Mumbai. The submarine’s induction into Indian Navy comes after it successfully cleared all the rigorous sea trials and tests in over last two and a half years. This state-of-the-art submarine has been built with such a technology that reduces its noise when it is under the sea. It can roll-in a crew of 36 members.

The INS Khanderi is an attack submarine. Its name and features are inspired by the fish named ‘Kanneri’, found in Arabian Sea. The fish hunts for its prey while swimming around the bottom of the sea using the barbells. Once it captures it prey, Kanneri fish uses its long saw to kill and cut the prey into pieces before eating it. On the similar lines, INS Khanderi comprises superior class stealth technologies to attack the enemies at sea as and when required. It comprises set of missiles and torpedoes along with a sonar suite that helps the submarine to detect the enemies from a long distance and classify its targets.

The motto of INS Khanderi is ‘Akhand Abhedya Adrishya‘ that implies unity of the crew and its stealth capabilities.

– The INS Khanderi construction began  in April 2009. It was first built into five separate segments which were later welded together.

– Its hull form, fin and hydroplanes have been designed to enable minimum underwater resistance.

– It is capable of saving oxygen availability and can stay underwater for long periods.

The Submarine has been built under the Project 75 programme. India aims to build a total of 6  Scorpene-class submarines in collaboration with France’s Transfer of Technology from Naval Group under the Project 75 at a cost of around Rs 25,000 crore. The first Scorpene-class submarine was INS Kalvari that was commissioned into Indian Navy in December 2017.