GII rankings were based on 80 indicators, from traditional measurements like research and development investments and international patent and trademark applications. 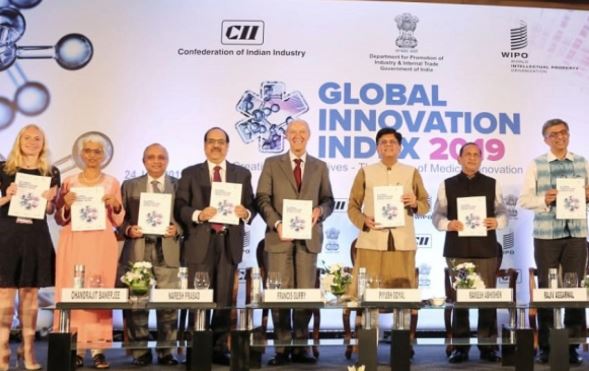 Commerce and Industry Minister Piyush Goyal released Global Innovation Index (GII) 2019 in New Delhi on July 24, 2019. India gained five ranks benefit to get 52nd rank, earlier in 2018 India was at 57th position. It ranked the innovation performance of 129 countries and economies around the world.

Current ranking was the twelfth edition of GII and ranks were based on 80 indicators, from traditional measurements like research and development investments and international patent and trademark applications to newer indicators including mobile-phone app creation and high-tech exports.

• The Global Innovation Index 2019 identifies that public R&D expenditures, particularly in some high-income countries, are growing slowly or not at all. It elevates concerns about the public sector’s central role in funding basic R&D and blue-sky research, which are keys to future innovations.
• Report talks about major science and technology clusters that are located in U.S., China, and Germany. However, India, Iran, Brazil, Russian Federation and Turkey also feature in the top 100 list.
• The top five clusters of science and technology are – Tokyo-Yokohama (Japan); Shenzhen-Hong Kong, China (China); Seoul (Republic of Korea); Beijing (China); San Jose-San Francisco (U.S.).
• Report finds that the global landscape of science, innovation, and technology has undergone important shifts over the last decades.
• Asian economies especially middle-income one, are rapidly contributing to global research and development (R&D) and international patenting rates via WIPO’s International Patent System.
• Global Innovation Index has announced the theme for the year 2019 is – Creating Healthy Lives – The Future of Medical Innovation, which aims to explore the role of medical innovation as it shapes the future of healthcare.

About the Global Innovation Index (GII)

According to the official website, GII is a leading reference for measuring an economy’s innovation performance. Moving into its 12th edition in 2019, the GII has evolved into a valuable benchmarking tool that can facilitate public-private dialogue and where policy-makers, business leaders, and other stakeholders can evaluate innovation progress on an annual basis.