100 Days of Modi Government 2.0: 100 days of bold initiatives and decisions

100 Days of Modi Government 2.0: The Government announced a mega bank merger of 10 big Public Sector banks into four entities to realize the goal of making India a $5 Trillion economy. 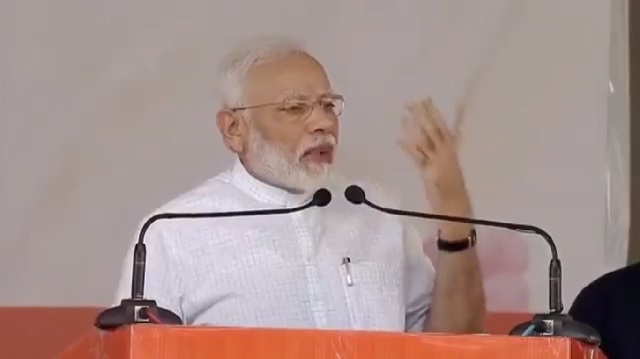 The first 100 days of Modi Government 2.0 have been of “development, trust and big changes” in the country, said Prime Minister Narendra Modi during a big rally in Rohtak, Haryana on September 8, 2019.

The Prime Minister said that the NDA government has taken several important decisions in the past 100 days, including in the farm sector, banking sector and for national security. The Prime Minister also highlighted that the number of bills passed in the previous Parliament session and the amount work that was done in the period is record-breaking, more than what has been covered in the past 7 years. 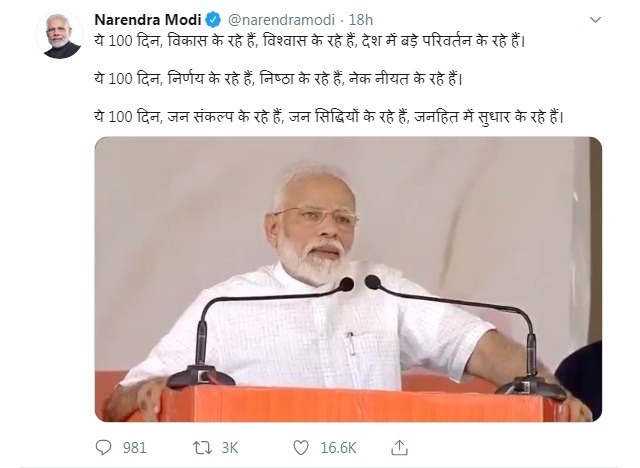 In its first budget, Modi Government 2.0 set the goal of making India a $5 Trillion economy by 2024, by enhancing focus on behavioural change, increase in private investment, structural reforms in agriculture and growth of SMEs in India.

The Union Government on August 30, 2019 announced a mega bank merger to realize its goal of making India a $5 Trillion economy. The Government merged ten of the biggest public sector banks (PSBs) into four entities. The aim was to create the 2nd largest, 4th largest, 5th largest and 7th largest PSBs in India. Now the total number of public sector banks in India stands at 12, down from 27 in 2017. The bank mergers are expected to reduce the cost of lending, enhance profitability and boost the economy.

The government announced that Aadhaar and pan card, both are interchangeable for filing for Income tax returns. Now, the taxpayers will be able to use any of the two identity cards to file for IT returns. The government has also simplified the GST refund process. All pending GST refund due to MSMEs will be paid within 30 days. The government also announced linking of Repo rate to interest rate, thus, reducing EMI for housing and car loans.

The Government withdrew angel tax provision for start-ups and their investors. The government has also decided to set up a dedicated cell for startups to address their problems. Small start-ups with turnover up to Rs 25 crore will continue to get tax holiday, as specified under Income Tax Act, 1961.

The government lifted the ban on government departments from purchasing new vehicles. Further, the government announced that the BS-IV vehicles, purchase till March 31, 2020 will remain operational for the entire period of registration. The main behind such measures is to provide a boost to the automobile sector.

The government has attempted to simplify lives by making labour laws more transparent. The Government has approved the Code on Wages Bill 2019 to provide fixed minimum wages to the entire workforce. The government has also simplified 32 central labour laws into 4 codes to make them more transparent and accountable. The new laws aim to ensure minimum along with timely payment to all workers. These laws are expected to benefit at least 50 crore unorganized sector workers. The Code on Wages, Bill 2019 also removes discrimination against women and ensures equal wages as male workers.

The Union Government, in a landmark decision, passed the Muslim Women (Protection of Rights on Marriage) Bill, 2019 on July 30, 2019. The Triple Talaq bill bans and criminalises the practice of instant triple talaq among Muslims. The bill aims to protect vulnerable Muslim women. The law makes instant triple talaq a punishable offence with imprisonment up to three years and fine.

The Government has incorporated the death penalty for sexual assault against children. The government has also decided to set up 1023 fast track courts in one year for speedy disposal of POCSO cases.

The Union Government has extended the PM Kisan Scheme to another 3.44 crore farmers, taking the total number of beneficiaries under the scheme to 6.37 crore.  Besides this, the government has enabled 5 crore small and marginal farmers to get pension benefits under PM Kisan Maan Dhan Yojana in the first three years. The scheme provides a minimum pension of Rs 3000 per month to those above 60 years of age.

The government announced the formation of a new ministry in its new term- the Jal Shakti Ministry to address water-related issues in the country. The Government has also launched the Jal Shakti Abhiyan on July 1, 2019, which is a campaign for water conservation and water security.

The budget session of the Modi Government 2.0 was one of the most productive parliamentary sessions in the last seven years. Important bills including revoking of Article 370, reorganization of J&K, triple talaq and motor vehicle bill were passed during the session. Overall, 40 bills were introduced in the two parliamentary houses (33 in LS and 7 is RS) during the budget session and 35 bills were passed by the Lok Sabha and 32 by the Rajya Sabha and 30 by both the houses. The passage of 30 bills by both houses is a record in a single session after the constitution of the Lok Sabha.

While the Modi Government calls its first 100 days as a period defined by development and key decisions, the opposition party, Congress has claimed the same period to be defined by three terms- tyranny, chaos and anarchy.